With no wild poliovirus reported anywhere in Africa since 2016, efforts are being intensified to actively look for the virus, to ensure it is not hiding in any remote areas.

In close collaboration with the Bill & Melinda Gates Foundation, WHO’s Regional Office for Africa is continuing to roll-out an innovative disease surveillance platform, enabling the real-time detection of suspected polio cases anywhere on the continent.

Thousands of health workers, volunteers and members of local communities across the continent have been equipped with geo-coded mobile phone technology, and trained to conduct regular and active surveillance visits to health centres across Africa.  Professionals and volunteers are tasked to regularly visit local health clinics and actively check for the presence of any child with polio-like symptoms (known as acute flaccid paralysis – AFP), or to look for children in their communities presenting such symptoms.  This information is subsequently fed back in real-time to national and regional authorities, enabling for rapid action and immediate dispatch of an investigative team as needed.

“This really is the future of disease surveillance,” comments Reuben Opara Ngofa of WHO’s African Regional Office in Brazzaville, who was instrumental in developing this innovative system and who recently returned from Burkina Faso where he helped roll out the system in remote areas.  “Particularly in remote or hard-to-reach areas, we need to know immediately if we have polio circulating in the area, and this system allows for real-time information, which in turn allows for an immediate real-time response.  If one of our informants identifies a child with polio-like symptoms anywhere, we will know about it immediately.  We are really giving the poliovirus nowhere to run.”

In addition to polio, this system helps detect and respond to other vaccine-preventable diseases, such as measles, yellow fever and neonatal tetanus.  Across west Africa, measles vaccination coverage is being assessed through this system, and a cholera outbreak in 2018 in Ethiopia was actively tracked. It is a clear example of the polio infrastructure adding value over and beyond merely eradicating polio.

Thanks to such innovations, and efforts of dedicated professionals and volunteers across Africa, the continent stands on the brink of a historic public health success:  the certification of wild poliovirus eradication.  In 1996, when Nelson Mandela launched the Kick Polio Out of Africa campaign, wild poliovirus paralysed more than 75,000 children every year, across every African country. 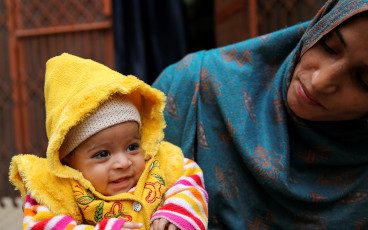