For 15 years Daeng Xayaseng has been travelling through rugged, undulating countryside by motorbike and by foot to deliver vaccines to children in some of the most remote villages in Laos.

It’s hard work but she is determined: “We have a target of children to reach and we’ll achieve that no matter how long it takes,” she says. “We’ll keep working until we reach every child.”

“For 15 years I’ve been working on campaigns like this,” she says. “Today we’re here with our outreach team to vaccinate children against polio. We’ll also go house to house to make sure no child misses out on being vaccinated.”

“We don’t want there to be another outbreak of polio so we have to reach everyone,” says Daeng. “In order to do that, immunizing every child in remote communities like this is a priority to ensure everyone is protected.”

UNICEF and other partners of the Global Polio Eradication Initiative are supporting the Lao Government to reach nearly half a million children under five with potentially life-saving vaccines. More than 7,200 volunteers and 1,400 health workers like Daeng and her team have been mobilized to deliver the oral polio vaccine as well as other vaccinations such as measles-rubella. 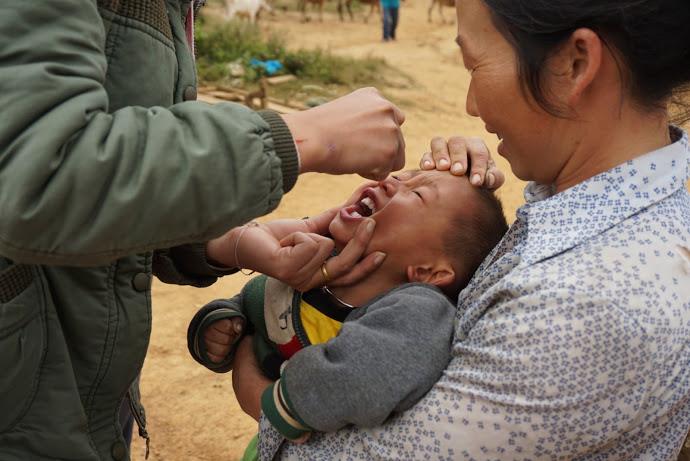 Stopping circulating vaccine derived poliovirus in Lao
In a country like Lao People’s Democratic Republic (PDR) where the landscape and diverse ethnic communities add to the challenge of reaching children with vaccines, communications and local knowledge are at the heart of the response. In November 2015, Dr Rudi Tangermann from the World Health Organization travelled to Lao People’s Democratic Republic to help fight the circulating vaccine-derived poliovirus type 1 (cVDPV) outbreak. Join Dr Tangermann through this series of photographs as he explains what needs to be done to stop any type of poliovirus in its tracks. 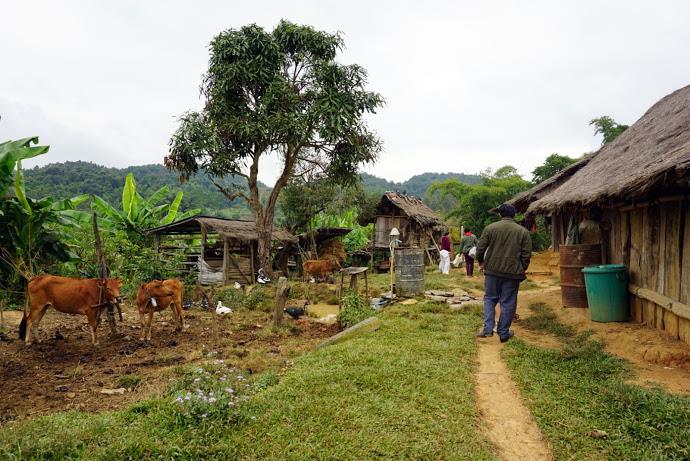 'In October, a child paralysed by cVDPV type 1 was confirmed in Lao PDR. Soon, three more people with paralysis were confirmed as the virus spread. An outbreak response was quickly mobilised to vaccinate all children under the age of 15 with the oral polio vaccine. In 2015, outbreaks of cVDPV have been found in Guinea, Madagascar, Nigeria and Ukraine as well as in Lao PDR, occurring because vaccination levels have been low for extended periods of time.' 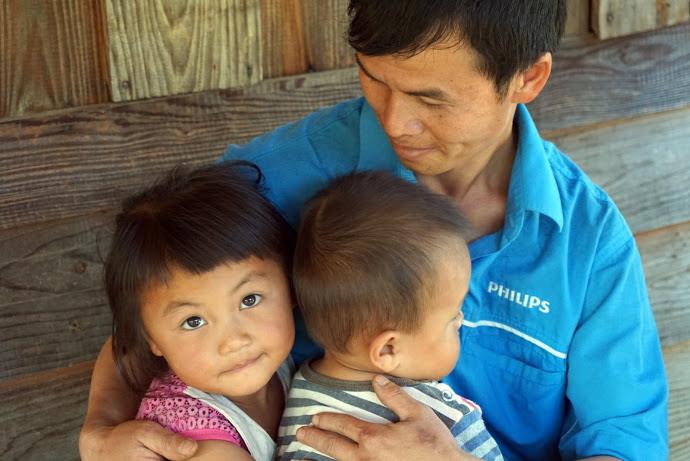 'When we fight polio anywhere, our priority is to serve the communities who are most at risk. In Lao PDR there are many diverse ethnic communities, with Hmong being the largest of these. Hmong communities have a culture, language, religious and social practices that are uniquely different from the national profile, meaning that the response has to be nuanced for local needs across the country.' 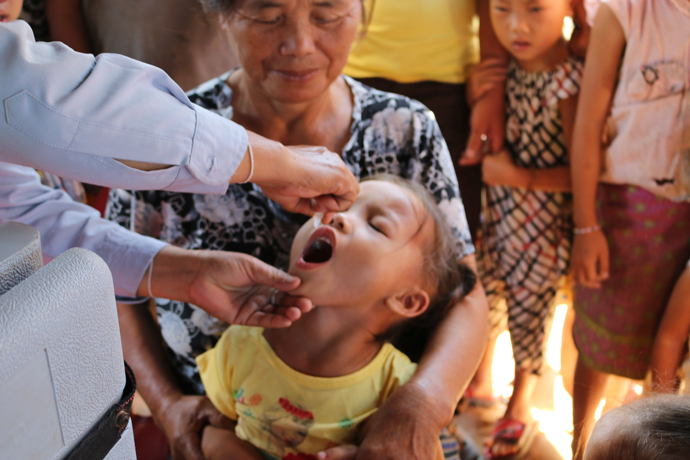 'Circulating VDPVs spread between people causing paralysis just like wild poliovirus can, which is why it is so important to vaccinate everyone after an outbreak. Polio vaccination campaigns reach as many children as possible across the country with the vaccine. Since the outbreak was confirmed, campaigns have already taken place in identified high risk provinces in Lao PDR, and more are planned to make sure that every child receives the three doses they need to develop immunity.' 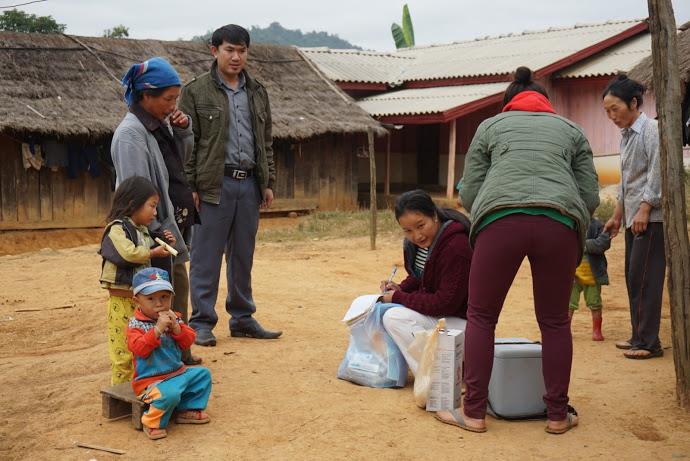 'During campaigns, outreach polio teams visit each village and set themselves up at a place which is easy for everyone to reach ready to give both the oral polio vaccine and other routine vaccinations. Lots of community mobilisation is done so that people know where to come, and when the team will be there. The villagers eagerly gather around the teams as they set up their small clinic with their cold boxes full of vaccines.' 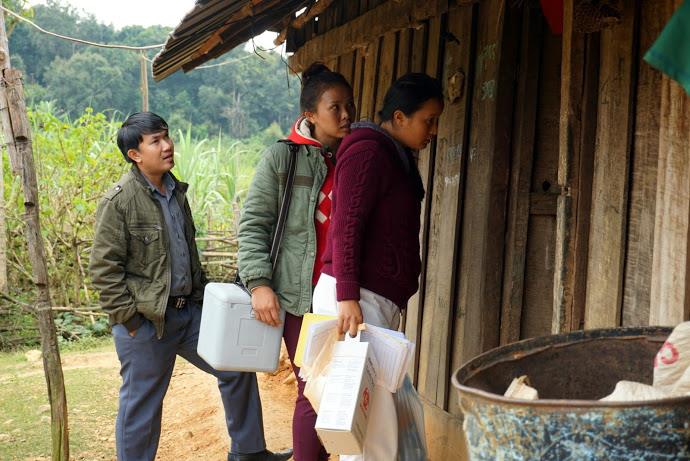 'After a long period of being polio-free, communicating the risk of polio and the benefits of vaccination to any community following an outbreak in a country is always a challenge. Ensuring Hmong communities know about polio and understand that it is a serious public health threat was a priority in the aftermath of the three cases. Here, the vaccination team visits a family which is reluctant to give their child the vaccine to convince them that it is safe and important to protect them. Having health workers from the same ethnic community is helpful, so that they have the language skills and understanding to communicate these important messages much more successfully.' 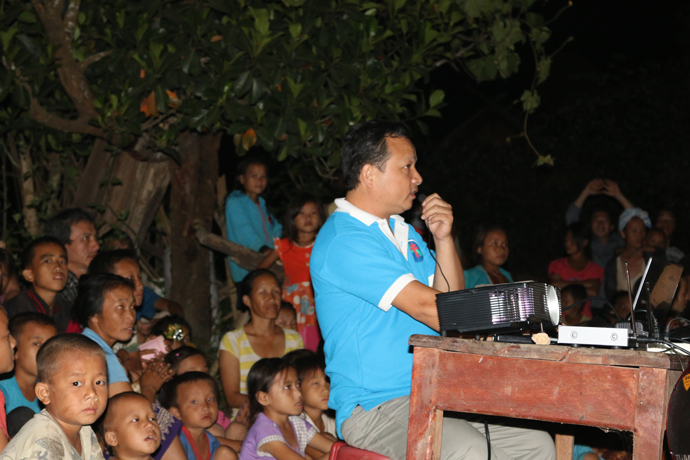 'In some villages, communities were taught about polio in the evening, when parents had returned from working in the rice fields and children had come home from school. Despite the fact that darkness had already fallen, here Mr Mengmoua Mouaxaychou improvised a projector screen against a bamboo wall and set up an outdoor cinema to pull in interested families and tell them about the upcoming campaign.'

'Monitoring trips are crucial to double check that every child received the vaccines during the campaign, and offer a second chance to vaccinate those missed on the first visit. We accompanied one of these mop-up campaigns run by two nurses who arrived in Nammen village, with cold boxes full of vaccines balanced on their motorbike alongside their monitoring forms. Careful records are made of the number of children known to live in each house in the community, and the number vaccinated during the campaigns, so that the programme knows where missed and vulnerable children remain.' 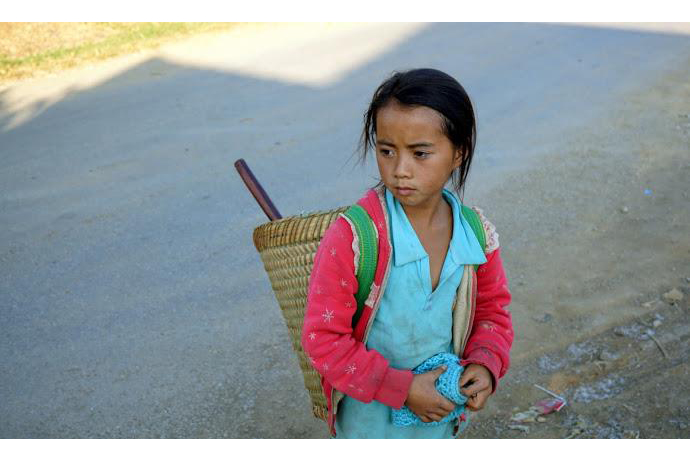 'We had to arrive in the villages for the mop-up campaigns as early in the morning as we could to reach children before their families set off for work in the rice fields. This six-year-old girl already had her knife and pack on her back, ready for a long days work after receiving the polio vaccine. The fact that this time of year when the rice is harvested made reaching every child in Lao PDR a much bigger challenge than it would have been at other times of year, because families were so rarely at home.' 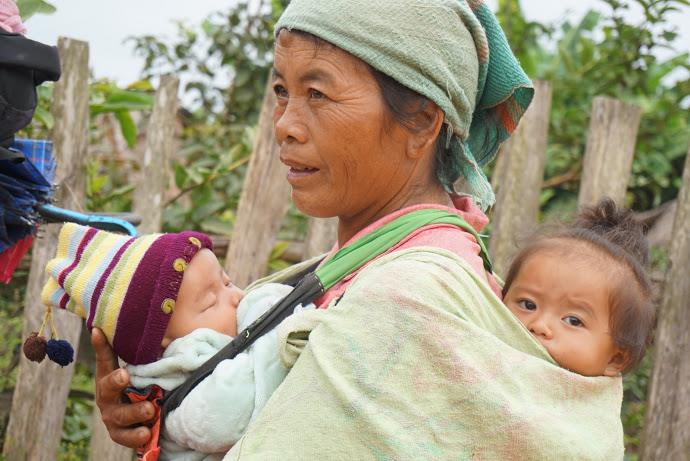 'This grandmother arrived at the vaccination point with her two grandchildren carried one on her front and one on her back, after a six hour walk to get here in time. Because they had been far away from the village harvesting rice, these children had missed being vaccinated when the health workers visited their village.' 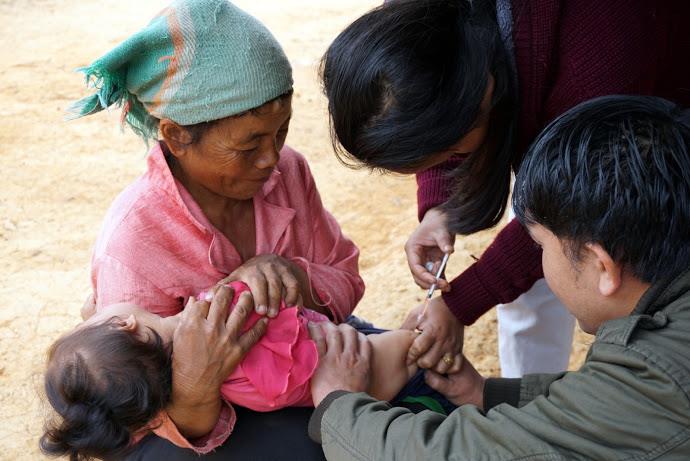 'This long trip made by this family was made all the more worthwhile, because the vaccination team was waiting with a dose of the pentavalent vaccine alongside the oral polio vaccine. This means that despite the long walk, her grandchildren received protection against six vaccine preventable diseases. The polio programme’s ability to go that much further to reach the most inaccessible children and to take other vaccines makes all the difference for remote families.' 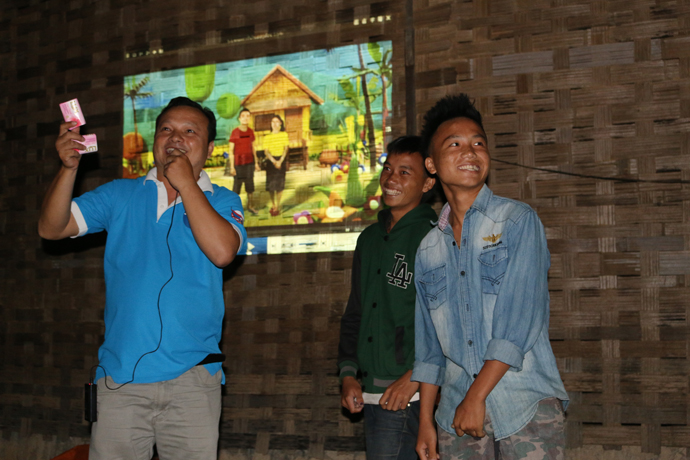 'As well as bringing other vaccines alongside the oral polio vaccine, the community engagement sessions are an important opportunity to reiterate the value of practising good hygiene by hand washing with soap before eating and after using the toilet. This will help to stop transmission of many more diseases than polio, and is another example of how the polio programme can bring other health benefits alongside its campaigns.' 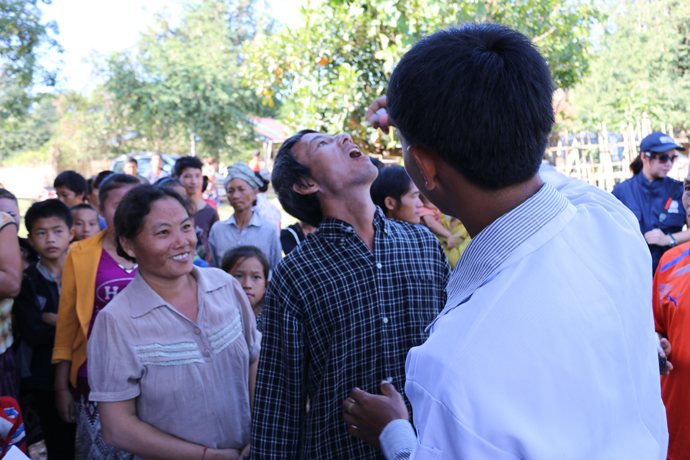 'In most cases, children are the age group most vulnerable to polio simply because they have poorer hygiene practices. However, adults can also become paralysed, as they have been during this outbreak in Lao. In high risk villages, adults have also been given the vaccine, like this rice farmer, who received the vaccine with his wife at a vaccination session before going to work in the fields.'

'Every time a child is vaccinated in a village, whether through a health care centre, a campaign or a mop-up round, these numbers need to be fed up to the district health centres, and from there up to the national level. It is only by knowing how many children are still being missed by these campaigns that the local health centre teams can plan and work to find new ways to engage communities thereby stopping the outbreak.' 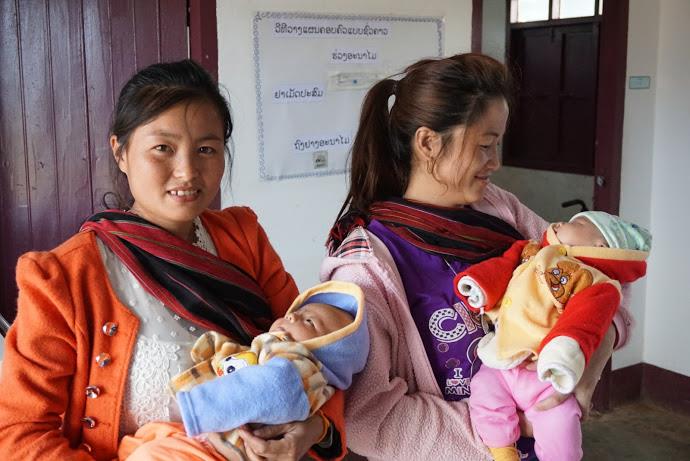 © WHO/R. Tangermann
All of these activities

'All of these activities - from planning, to campaigns, to communications to data analysis and planning - are the bread and butter of the polio eradication programme. With less cases of wild poliovirus than ever before, the spotlight is moving to cVDPVs as the Global Polio Eradication Initiative continues its work to ensure that no child is ever at risk of any type of polio ever again. Whether responding to wild polio or vaccine-derived polio, the most important thing is to vaccinate children with oral polio vaccine. The combination of local knowledge and globally tested techniques used in Lao PDR will be what takes us over the finishing line to a world with no children paralysed ever again by any type of poliovirus.'