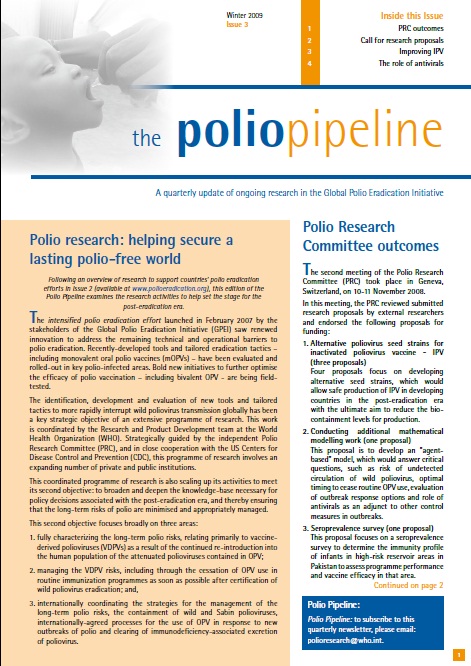 The Independent Evaluation validated the overall strategies for polio eradication, underscoring the importance of the programmatic decision to explore and evaluate more creative ways of reaching children and the value of the Polio Research Committee (PRC) to this work. At the November 2009 meeting of the PRC, discussion centred on research to close operational gaps in settings such as northern Nigeria as well as boost mucosal immunity in settings such as northern India.

This issue of the Polio Pipeline will examine the outcomes of those discussions and outline new research to maximize the benefits of polio eradication strategies.

Conclusions and recommendations of the Polio Research Committee

The Polio Research Committee (PRC) provides guidance on overall strategic direction in research, identifies unmet research needs, and assists in identifying investigators and designing studies to answer unanswered research questions. The 4th meeting of the PRC was convened in Geneva, Switzerland in November 2009, to provide the Global Polio Eradication Initiative (GPEI) with expert advice on:

In conclusion, the PRC recommended that the GPEI focus its research especially on:

Examples of proposals to be considered

a) Epidemiology and risk factors

b) Intervention to help induce and maintain mucosal immunity

Not considered for funding:

In some polio-endemic and re-infected countries, there is still room for further improvement in vaccine coverage and/or population immunity. Communication research suggests that there are still gaps in knowledge, attitude and perception among caregivers and vaccinators in many countries.

Examples of proposals to be considered

b) Develop and evaluate tools to improve SIA/AFP surveillance management

Not considered for funding:

* Total quality control (TQC) is management philosophy to apply quality management principles to all areas of business from design to delivery
** Six Sigma is management strategy which seeks to improve the quality of process outputs by identifying and removing the causes of defects (errors) and minimizing variability in manufacturing and business processes.

The rationale for supplementary immunization activities (SIAs) is to rapidly increase population immunity by reaching a target population within a short period of time with oral polio vaccine (OPV). Historically, subsequent trivalent OPV doses had to be administered with an interval of four to six weeks, due to the known persistence of vaccine-virus in a child’s gut for up to six weeks, risking interference between the three different types of poliovirus contained in trivalent OPV. Since the licensure and use of monovalent OPVs in mid-2005, the issue of interference in subsequent dose administration has been removed, as only one poliovirus strain is contained in such vaccines. This new tool has enabled the implementation of a new approach – the Short Interval Additional Dose (SIAD) strategy.

The SIAD approach enables a more rapid raising of population immunity levels, by administering two doses of monovalent OPV over the course of one to two weeks (as opposed to four to six weeks). This approach has proved particularly valuable in areas where populations may be difficult to reach, such as in conflict affected areas or among nomadic populations, and may play a significant role in new outbreak settings. By rapidly administering two doses during a window of opportunity (such as a temporary cessation of conflict), children who would otherwise not have benefited from two doses are now able to be more rapidly protected against specific serotypes of the disease.

Following its successful application in Somalia which helped the country become again polio-free in March 2007, the SIAD approach has since established itself as a core eradication strategy between large-scale National and Subnational Immunization Days (NIDs and SNIDs) in areas of Pakistan and Afghanistan, as well as in outbreak settings (e.g. Kenya).

While the programmatic imperative for using monovalent OPVs during SIAD campaigns is persuasive, the scientific basis for SIAD is not fully established. The only data are from industrialized countries from the late 1950s and early 1960s where monovalent OPV was administered in shorter intervals under study conditions. However, these studies had very small sample sizes and cannot be easily projected onto developing country settings.

To correct this gap, and to establish a better scientific basis for SIAD, the Polio Research Committee (PRC) has approved funding for a clinical trial in Egypt that will assess SIAD rounds in young infants. The three arms of the trial include two intervention arms (that will administer monovalent OPV type 1 with intervals of seven days or 14 days) and a control arm that will provide monovalent OPV type 1 with an interval of 30 days. The study protocol is currently being reviewed by the respective ethical review committees at the World Health Organization and in three collaborating institutions in Egypt. The trial is due to start in the first quarter of 2010, and the results should be available in the third quarter.

Global status of licensure and pre-qualification processes for monovalent OPV type 1, 2 and 3 and bivalent OPV

* SAS: special access scheme for specific use
** The letter sent to UNICEF recommends the procurement of the product
*** Completion of the prequalification process depends on satisfactory outcome of ongoing clinical trials

The use of LQAS to assess polio immunization coverage in Nigeria

Ensuring consistently reliable monitoring data of supplementary immunization activities (SIAs) is a key factor to ensuring that polio eradication strategies are effectively implemented. A new tactic of the new Global Polio Eradication Initiative Programme of Work 2010–2012 will be to ensure enhanced monitoring of SIAs, both in endemic and outbreak areas.

To this effect, the World Health Organization has been adapting and testing the Lot Quality Assurance Sampling (LQAS) method, which classifies areas of interest corresponding to “lots” as having acceptable or unacceptable levels of vaccine coverage, to evaluate vaccination programmes in developing countries.

Conducting LQAS surveys in the field is straightforward: if in a sample of individuals the number of unvaccinated exceeds a pre-set decision value, then the area (lot) is classified as having an unsatisfactory level of vaccine coverage and mop-up activities are recommended. This ease of application makes the LQAS a very operational tool to detect pockets of low vaccine coverage and therefore direct focused vaccination efforts.

The pilot proved that LQAS is feasible and useful for the polio eradication programme to efficiently monitor and guide future OPV campaigns in Nigeria and other polio-infected countries.

Where are the immunity gaps?

A number of studies looking at the immunity profile of infants and children in India have now been completed and preliminary results are available. These studies include:

1. re-testing of the 2007 seroprevalence survey in Mordadabad district in Uttar Pradesh state

The laboratory processing of these samples was conducted by the Enterovirus Research Centre in Mumbai, India and by the US Centers for Disease Control and Prevention (CDC) in Atlanta, USA. While the detailed analyses are pending finalization and the ensuing results will likely be published in the scientific literature in the course of 2010, there are a number of interesting and sometimes unexpected preliminary results that will influence programmatic action and the research agenda for 2010–2011. These include:

2.significant improvements in type 1 seroprevalence between the 2007 survey and the 2009 trial in infants aged 6-9 months (approximately 20% points) due to substantial increases in the number of polio vaccine doses received;

3. the substantially lower levels of seroprevalence for types 2 and 3 in all three studies; and,

4. the ability of one dose of inactivated polio vaccine (IPV) to close the immunity gaps very effectively, with 100% for type 2 and >90% for type 1 (it is important to note that during this particular investigation, a fractional-dose of IPV delivered intradermally did not perform as effectively as a whole-dose IPV, though further research to establish a potential role of fractional-dose IPV is needed). This immunity gap closure was observed already in the seven-day blood sample.

It appears that even in the most difficult areas in northern India, the polio eradication programme can achieve very high humoral immunity levels (>99%) to type 1, somewhat at the cost of lower levels for types 2 and 3, respectively. The recently developed bivalent OPV (containing types 1 and 3) should help to alleviate this issue. The AFP study also demonstrated lower type 2 and 3 seroprevalence levels in <5 year-old children, questioning the postulated “high” force-of-infection of these viruses in northern India. And finally, the observation that 90%–100% of seronegative infants seroconvert seven days after receipt of an IPV dose, suggests that most of these infants had been primed and respond with an anamnestic immune response.

In summary, the existing immunity gaps in northern India are now focused primarily for types 2 and 3. As noted above, these studies raise a number of important issues: it is apparent that more research is needed both to characterize these immune responses, especially for mucosal immunity, and to devise new means to measure mucosal immunity and institute new measures to boost mucosal immunity. To that end, a number of studies are being planned for implementation in India and Cuba in 2010.