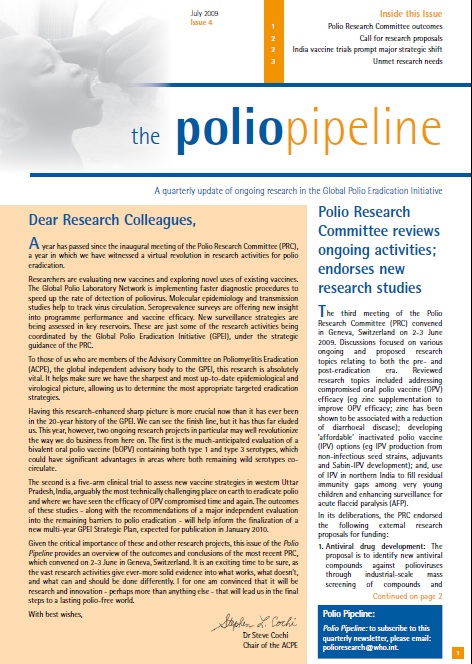 Following an overview of research to support countries’ polio eradication efforts in Issue 2, this edition of the Polio pipeline examines the research activities to help set the stage for the post-eradication era.

The intensified polio eradication effort launched in February 2007 by the stakeholders of the Global Polio Eradication Initiative (GPEI) saw renewed innovation to address the remaining technical and operational barriers to polio eradication. Recently-developed tools and tailored eradication tactics – including monovalent oral polio vaccines (mOPVs) – have been evaluated and rolled-out in key polio-infected areas. Bold new initiatives to further optimize the efficacy of polio vaccination – including bivalent OPV – are being field tested.

The identification, development and evaluation of new tools and tailored tactics to more rapidly interrupt wild poliovirus transmission globally has been a key strategic objective of an extensive programme of research. This work is coordinated by the Research and Product Development team at the World Health Organization (WHO). Strategically guided by the independent Polio Research Committee (PRC), and in close cooperation with the US Centers for Disease Control and Prevention (CDC), this programme of research involves an expanding number of private and public institutions.

This coordinated programme of research is also scaling up its activities to meet its second objective: to broaden and deepen the knowledge-base necessary for policy decisions associated with the post-eradication era, and thereby ensuring that the long-term risks of polio are minimised and appropriately managed.

The second meeting of the Polio Research Committee (PRC) took place in Geneva, Switzerland, on 10-11 November 2008. In this meeting, the PRC reviewed submitted research proposals by external researchers and endorsed the following proposals for funding:

Four proposals focus on developing alternative seed strains, which would allow safe production of IPV in developing countries in the post-eradication era with the ultimate aim to reduce the biocontainment levels for production.

This proposal is to develop an “agent-based” model, which would answer critical questions, such as risk of undetected circulation of wild poliovirus, optimal timing to cease routine OPV use, evaluation of outbreak response options and role of antivirals as an adjunct to other control measures in outbreaks.

This proposal focuses on a seroprevalence survey to determine the immunity profile of infants in high-risk reservoir areas in Pakistan to assess programme performance and vaccine efficacy in that area.

This proposal focuses on environmental surveillance to enhance the sensitivity of poliovirus surveillance in Pakistan.

The proposal is to identify new antiviral compounds against polioviruses through screening of candidate compounds and evaluation of lead compounds in mouse infection models.

Use of adjuvant for IPV (one proposal)

Adjuvants would offer the opportunity to save IPV production costs by reducing requirements of antigenic content. The proposal is to evaluate the use of Immunositumulatory Particles (IStP) and other novel and traditional adjuvants for IPV. This is an update to the article entitled “Improving IPV” published in the first issue of the Polio pipeline (Issue 1, Summer 2008). The aim of this project is to make inactivated poliovirus vaccine (IPV) affordable to countries which may choose to use it after oral poliovirus vaccine (OPV) cessation. A five-pronged strategy is being pursued:

A number of studies have shown that a routine schedule with IPV given at 2, 4, and 6 months of age provides immunity in >90% of children, also in developing countries. A 2-dose schedule provided at 2 and 4 months is suboptimal (<90% seroconversion to at least some serotypes). Recently, a decision was made to conduct a new 2-dose trial in 2009-2010 to evaluate whether >90% seroconversion could be achieved if the first IPV dose is delayed to later in life (e.g. 4 months) and the interval between the two IPV doses is extended (e.g. by 4 months).

In terms of dose reduction, preliminary results are available from two fractional-dose trials: Cuba and Oman. In both trials, a needle-free device – Biojector®2000 – was used to administer the intradermal fractional doses (1/5th of a full dose). The results are excellent for the 2, 4, and 6-month schedule in Oman, where >95% of children seroconverted to all three poliovirus serotypes. The results in Cuba provides additional evidence that IPV at 6, 10, and 14 weeks is suboptimal in inducing adequate immunity, and furthermore, with this early schedule, the intradermal arm performed substantially inferior compared with the intramuscular arm.

Nevertheless, the data are extremely encouraging and suggest that the fractional dose strategy may provide a viable option for decreasing costs without loss of immunity. Trial results will be submitted for publication in the second quarter of 2009.

A number of research groups have evaluated traditional adjuvants for IPV and have reported that a 3 to 5-fold reduction in antigen content may be feasible. Recently, the Infectious Disease Research Institute (IDRI) in Seattle, USA, with funding provided through the Polio Research Committee (PRC), has been examining newer adjuvants which could lead to further decreases in antigen needs, including oil and water emulsion. The results of this study should be forthcoming in the first quarter of 2009.

Given that formalin is quite abrasive to poliovirus and may destroy some of the antigenic sites on the capsid of the virus, a collaboration has been established with the Netherlands Vaccine Institute (NVI) to examine β-propriolactone as an alternative inactivation agent for the inactivation of poliovirus strains used in the IPV. Since β-propriolactone is used to inactivate rabies virus, there is a body of evidence already available for this agent. In addition, a preliminary study suggested that IPV inactivated by β-propriolactone is substantially more immunogenic than IPV inactivated by formalin. The results of this work should be available in 2010.

Production processes have been established first in the 1950s (Salk) and then in the 1960s (van Wezel). Since then few improvements were noted. However, increasing the cell densities in the bioreactors to grow poliovirus or examining suspended cells increase the antigen yield, and potentially lower the production costs.

Because of the stringent containment requirements after polio has been eradicated, the production of IPV in developing countries must be based on Sabin or other strains. Because of this, WHO has established a collaboration with NVI to develop a Sabin-based IPV. The pharmaceutical development of this product has nearly been completed, and the focus is now on the clinical development of this new vaccine over the next 3 to 5 years. Preliminary results suggest that the immunogenicity of Sabin virus is superior for type 1 polio, inferior for type 2 polio, and roughly equivalent for type 3 polio. Ultimately, through technology transfer, developing country manufacturers should be in a position to produce Sabin-IPV.

In February 2006, the National Research Council (NRC) of the (US) National Academies issued the report: Exploring the role of antiviral drugs in the eradication of polio. The report concluded that “…it would be prudent to develop at least one, but preferably two, polio antiviral drugs as a supplement…for the control of poliomyelitis outbreaks in the post eradication era.” The report further recommended forming a drug development team to guide the effort.

In response to the NRC recommendations, The Task Force for Child Survival and Development (TF) in Atlanta, USA, established the Poliovirus Antivirals Initiative (PAI), in partnership with the World Health Organization (WHO), the US Centers for Disease Control and Prevention (CDC), the Food and Drug Administration (FDA), and the National Institute for Allergy and Infectious Disease (NIAID). A multidisciplinary Steering Team consisting of five independent experts coordinates the efforts of drug sponsors. Currently there are two drug sponsors: ViroDefense, Inc. (capsid inhibitor) and Pfizer, Inc. (protease inhibitor). Both drug candidates are in early stages of development.
There are three situations anticipated for polio antiviral drug use:

The immediate PAI goal is to determine if a candidate compound is safe and has the capacity to prevent, reduce, or stop virus shedding when administered to adult volunteers before or after OPV challenge. If successful, these “proof-of-concept” results should permit the opportunity to apply for a compassionate use investigational new drug (IND) for treatment of persons chronically shedding poliovirus (situation 1) and individuals exposed in a laboratory incident (situation 2). Proof-of-concept results will also permit assessment of the drug’s practical utility for community outbreaks (situation 3) and allow “go-no-go” decisions for further development.