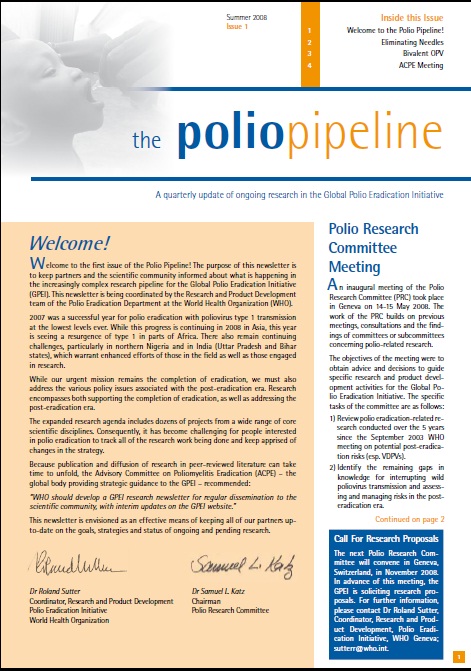 Welcome to the first issue of the Polio pipeline! The purpose of this newsletter is to keep partners and the scientific community informed about what is happening in the increasingly complex research pipeline for the Global Polio Eradication Initiative (GPEI). This newsletter is being coordinated by the Research and Product Development team of the Polio Eradication Department at the World Health Organization (WHO).

2007 was a successful year for polio eradication with poliovirus type 1 transmission at the lowest levels ever. While this progress is continuing in 2008 in Asia, this year is seeing a resurgence of type 1 in parts of Africa. There also remain continuing challenges, particularly in northern Nigeria and in India (Uttar Pradesh and Bihar states), which warrant enhanced efforts of those in the field as well as those engaged in research.

The expanded research agenda includes dozens of projects from a wide range of core scientific disciplines. Consequently, it has become challenging for people interested in polio eradication to track all of the research work being done and keep apprised of changes in the strategy.

Because publication and diffusion of research in peer-reviewed literature can take time to unfold, the Advisory Committee on Poliomyelitis Eradication (ACPE) – the global body providing strategic guidance to the GPEI – recommended:

“WHO should develop a GPEI research newsletter for regular dissemination to the scientific community, with interim updates on the GPEI web site.”

This newsletter is envisioned as an effective means of keeping all of our partners up to date on the goals, strategies and status of ongoing and pending research.

An inaugural meeting of the Polio Research Committee (PRC) took place in Geneva on 14–15 May 2008. The work of the PRC builds on previous meetings, consultations and the findings of committees or subcommittees concerning polio-related research. The objectives of the meeting were to obtain advice and decisions to guide specific research and product development activities for the Global Polio Eradication Initiative. The specific tasks of the committee are as follows:

The following proposals were discussed and endorsed by the committee for priority follow-up and funding.

The PRC is also committed to identifying remaining gaps in knowledge pertaining to the interruption of wild poliovirus transmission and preparation for the post-eradication era. This preparation revolves around proposing appropriate studies, determining their priority and funding levels, reviewing external research activities and engaging interested parties, stakeholders and potential new collaborators – all challenging undertakings for the PRC during the coming year. To this effect, the PRC is currently soliciting research proposals, ahead of its next meeting in November 2008.

One of the greatest shortcomings of inactivated poliovirus vaccine (IPV) use in developing countries involves the requirement to administer the vaccine through needle injections (subcutaneous, intramuscular or intradermal). The disadvantages of using needles are pain at the site of administration, logistical difficulties, safety and disposal concerns. Additionally, vaccine administration with syringes requires trained medical staff and precludes the involvement of the legions of non-medical volunteers currently available to assist with OPV campaigns. For this reason, studies in Cuba and Oman – which are testing the viability of a fractional dose and evaluating serologic response to 1/5th of a standard dose – have employed the use of an intradermal jet injector which uses no sharps and can be manually reset without batteries or compressed air charges.

If these studies prove successful, they would confer non-inferior serologic and mucosal immunity at 1/5th of the cost of the current IPV dose and could be administered by volunteers with an innovative and painless tool. These results could influence global policy recommendations on IPV for middle and low-income countries in the future. Preliminary results of these trials should be available by late-2008.

The Advisory Committee on Poliomyelitis Eradication (ACPE) recommended in 2004 that the eradication of wild polioviruses (WPVs) will be followed by the discontinuation of immunization by oral poliovirus vaccines (OPV) as soon as feasible, a goal endorsed by the World Health Assembly (WHA) in May 2008. However, before OPV can be stopped globally, the following six prerequisites were defined to minimize the risks of poliovirus re-introduction or re-emergence:

High IPV coverage will be a requirement for countries which maintain poliovirus stocks in the post-OPV era to reduce the consequences of an inadvertent release. However, other countries may also choose to maintain polio immunity, using IPV.

To put IPV within reach of any country which may choose to use it after OPV cessation, WHO is pursuing a range of approaches to establish ‘affordable’ strategies for IPV use (i.e., to achieve immunity at a cost similar to that achieved through OPV) following OPV cessation:

To meet the first objective, the GPEI is pursuing a multi-pronged research agenda:

To meet the second objective, the GPEI is working with academia, government and industry to develop:

Currently, dose-reduction trials are nearing completion in Cuba and Oman. Both trials are testing intradermal injection at 1/5th of the standard intramuscular dose, but using different schedules.

Prior evidence suggests that fractional dose administration may produce similar serologic immunity to the standard intramuscular dose. In addition, since the dermis is a mucosal surface, the intradermal injection may actually stimulate IgA mucosal immunity, which may enable immunized children to prevent or shorten the period that poliovirus replicates in the intestinal tract.

Several groups of investigators are interested in testing different adjuvants for use with IPV. Furthermore, the GPEI has entered into a multi-agency collaboration to bring Sabin-IPV to the proof-of-principle stage. Clinical trials for Sabin-IPV are presently taking place in Japan and India, with the first regulatory approval for this product envisioned as early as 2009.

In the remaining four polio endemic countries – Nigeria, India, Pakistan and Afghanistan – there has been co-circulation of wild poliovirus types-1 and 3 in some infected areas. This co-circulation has resulted in calls for the tests and potential licensing of a bivalent oral poliovirus vaccine (bOPV) for use in difficult areas where type-1 and 3 viruses remain endemic.

Proponents argue that a bivalent vaccine would improve overall immunity levels by combining type 1 and 3 vaccines into a single dose. Hesitation by regulatory agencies to support licensure of the bivalent vaccine stems from the lack of efficacy and safety data that were commonly available for monovalent OPV trials. Of particular importance is the degree to which a bOPV would compromise seroconversion to each serotype. In November 2007, the Advisory Committee on Poliomyelitis Eradication (ACPE) recommended conducting a trial to test the efficacy of OPV on seroconversion rates prior to pursuing vaccine licensure. To accomplish this, the group proposed the addition of a fourth arm to an mOPV seroconversion study in India planned for mid-2008.

Trivalent OPV (tOPV) has been in use globally since the 1960s, with greater than two billion doses having been administered annually. Monovalent OPV (mOPV) for each of the three poliovirus types were used during the development of tOPV. For a short time in 1959, bivalent OPV (bOPV) was experimented with using a balanced combination of mOPV1 and mOPV3 in Estonia, Hungary and Lithuania.

The immunogenicity of tOPV in tropical areas is variable and primarily stimulates seroconversion to type 2 virus and partial conversion to types 1 and 3. Until 2005, tOPV was the only oral vaccine licensed around the world and used by the GPEI.

In 2004, the GPEI embarked on an aggressive campaign to test and license the new monovalent vaccines. The primary goal was to boost per-dose immunity in Egypt, where low-level type 1 transmission persisted. This resulted in accelerated eradication efforts, since monovalent vaccines could be used to increase protection against the remaining two circulating wild virus serotypes. Monovalents can also be used to more effectively respond to vaccine- derived poliovirus (VDPV) outbreaks. In the post-eradication era, mOPVs can be used to respond to outbreaks of VDPVs by enhancing the response to the target and reduce the risk of causing non-target VDPVs.

To date, monovalent vaccines have shown to be three times as effective in inducing serologic responses as tOPV.

The development and use of mOPVs in national and sub-national campaigns has created the impetus to prioritize eradication of type-1 virus, which is more virulent and poses a greater threat to cross-border transmission as compared to type-3. Using a bOPV might impair the strategy of preferentially stopping type-1 virus first. Consequently, the ACPE stated that a bOPV would have to perform at least 80% as well as the monovalent OPVs for each strain to consider the effort of licensing.

Stay tuned for the results of this study in an upcoming issue of the Polio pipeline in mid–2009, to see if bOPV promises to be a useful tool in the armament of the eradication programme