Abdullahi Mahamed Noor, hailing from Mogadishu in Somalia, wears multiple hats. By day, he is an experienced and dedicated polio programme zonal coordinator. By night, you can find him racing down the court as president of the Somali Basketball Federation.

Mahamed’s journey to end polio started in 1999, as a vaccinator in Adale District of Middle Shabelle in Southern Somalia. Since then, he has worked to combat multiple polio outbreaks in his country, including the current cVDPV outbreak.

Mahamed strongly believes that eradicating polio isn’t just about delivering the vaccine. To maintain high immunity levels, the programme must deliver a clear message about the safety and importance of the vaccine and help communities become better informed. To achieve this goal, Mahamed uses his sporting connections to combine basketball with innovative polio immunization messages, with the objective of increasing awareness throughout his community.

Last year, Mahamed took advantage of a Vaccination Week to deliver messages on polio eradication at several basketball games held in Mogadishu. “When people come to the stadium, they see messages on polio awareness and how important it is to vaccinate children to build their immunity against polio virus. They pass those messages to family and community members,” he explains.

From 1999 to 2010, a period during which Somalia suffered several polio outbreaks, the inaugural ceremonies of most of the major sports activities in Somalia would begin with statements encouraging people to vaccinate their children against polio.

Currently, Mahamed supports polio officers to develop comprehensive microplanning for immunization campaigns in Somalia. He emphasizes fostering trust between frontline workers and communities, since the polio workers in Somalia travel door to door to deliver vaccine. The basketball games that he organizes in his spare time help to increase acceptance of polio workers in the community.

“Part of my job is to convince the families who refuse to vaccinate their children. I quite often use my experience of being involved in basketball to educate them on benefits of polio vaccination and preventing disability related to poliovirus.”

Sportspeople are active in the fight to end polio the world over. Ade Adepitan, a British Paralympian, wheelchair basketball player and broadcaster, who is himself a polio survivor, is a strong advocate for polio eradication. In Pakistan, cricketers often promote polio eradication campaigns during the highly watched and well-attended matches.

In many parts of Somalia, poverty, conflict, internal displacement and weak health infrastructure often mean that vaccination levels remain relatively low. Amidst these trying circumstances, dedicated workers like Mahamed are playing a critical and innovative role in educating communities about polio and the absolute importance of vaccination to defeat the disease.

On the streets with Somalia's poliovirus detectives
A targeted outbreak response: Reaching out to Somalia's high risk populations
Vaccination in Somalia: "It's my job" 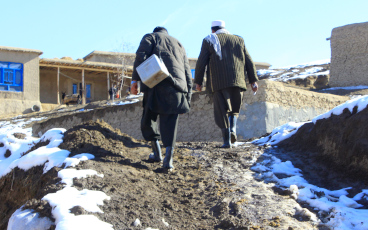 Trekking through the snow to deliver vaccines
Vaccinators tackle winter conditions and challenging contexts during Afghanistan’s last polio campaign of the year. 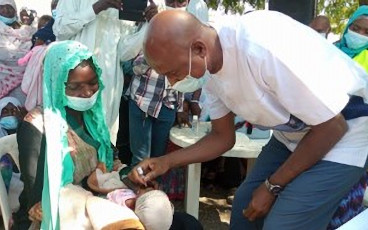