Virus isolated from Rivne province in north-west of country

In Ukraine,  one case of polio, caused by circulating vaccine-derived poliovirus type 2 (cVDPV2), has been confirmed.  A cVDPV2 was isolated from a 17-month old girl with acute flaccid paralysis, from Rivne province (in the north-west of the country), and from six healthy contacts (siblings of the girl).

The current isolate is closely linked to the virus originating in Pakistan which has also been a cause of ongoing cVDPV2 outbreak in Tajikistan.  Local authorities, along with WHO regional and country teams, are conducting further investigations to determine the source of the isolated virus, whether there has been transmission within Ukraine, and to ascertain any potential risk of further spread.  The Government of Ukraine officially notified WHO of the isolated virus on 3 October 2021 and publicly announced the case detection on 6 October 2021.

Supplemental vaccination of all young children in the affected area is planned to ensure catch up for any children who may have missed routine polio vaccination and ensure that all are protected from the disease.  This will take place from 11 to 22 October with inactivated polio vaccine (IPV) for children aged less than five years of age, regardless of previous vaccination history, in the immediate area of where the case was detected.  Additional vaccination activities will aim to cover the entire population of under-five year olds in this region over the coming 90 days.

In 2015, Ukraine was affected by a circulating VDPV type 1, resulting in two cases at the time.  This outbreak was successfully stopped in 2016. An ambiguous VDPV type 2 was reported in Odesa province of Ukraine in 2016. The latest detection in Rivne is unrelated to the 2015 outbreak and 2016 isolation.

cVDPVs can occur if the weakened strain of the poliovirus originally contained in OPV passes among under-immunized populations for a prolonged period of time. If not enough children are immunized against polio, the weakened virus can pass between individuals and over time genetically revert to a form that can cause paralysis.

National coverage in Ukraine with the first dose of inactivated poliovirus vaccine—which protects against all three types of polioviruses—was 87% in 2020, according to WHO/UNICEF estimates. However, subnational coverage varies and is reportedly below 50% in some regions of the country.

VDPV outbreaks are stopped using the same tactics that have enabled progress against wild polio – ensuring every child is reached with polio vaccines through high-quality immunization campaigns and routine immunization.

For more information about cVDPVs, please see the GPEI’s guide and a short animated video.

For many Palestinian parents, vaccination comes first
The first supplementary polio campaign in eight years puts caregivers to the test 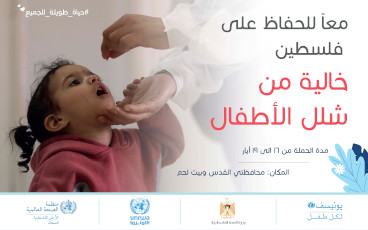