News → News Stories → Introducing the Inactivated Polio Vaccine: How Far Have We Come?

Introducing the Inactivated Polio Vaccine: How Far Have We Come?

As part of the most ambitious globally synchronised vaccine introduction in history, the inactivated polio vaccine is being introduced into routine immunization systems around the world in 2015 and 2016.

The Global Polio Eradication Initiative (GPEI) is midway through the most ambitious, largest and fastest globally synchronised vaccine introduction in history as part of its drive towards a polio-free world.

How far have we come?

As part of the Endgame strategy for polio eradication, the inactivated polio vaccine (IPV) is being introduced into the routine immunization systems of every country that currently uses the oral polio vaccine (OPV). Half way into 2015, exciting progress is being made towards this goal, which will help to boost immunity against all types of poliovirus, giving children higher protection against paralytic polio.

The introduction of IPV has already made great strides, with 20 countries adding the vaccine to their immunization schedules between January and July this year alone, bringing the number of countries using the vaccine to 97. This means that 51% of the global birth cohort is now receiving at least one-dose of IPV. A surge of introductions in the coming months will lead to over 75% of countries having at least one dose of IPV in their routine immunization systems by the end of October. By the end of the year, all countries with the highest risk of wild poliovirus or the emergence of vaccine-derived polioviruses- the highest priority categories for IPV introduction- will have completed the introduction. This will ensure that the most vulnerable children are given the best possible protection against polio.

The polio eradication programme has two vaccines with which it protects children against the virus: IPV and the OPV. The use of the oral polio vaccine (OPV) has led to wild poliovirus being stopped in nearly every country in the world, and to no cases of wild poliovirus type 2 (WPV2) since 1999. Currently, 156 countries and territories use trivalent OPV (tOPV), which protects children against all three types of wild poliovirus, to vaccinate children against polio in their routine immunization programmes. While OPV is the only vaccine that is effective in stopping the transmission of poliovirus during outbreaks, the introduction of IPV in these countries will increasingly play an important role in keeping those countries polio-free in the long term.

The weakened type 2 strain of attenuated poliovirus in tOPV is no longer needed to protect children from wild polio, as no case of type 2 has been seen since 1999. In addition, the type 2 component of OPV causes more than 90% of all vaccine derived polioviruses (VDPVs), which occur when a very rare change in the attenuated virus in the vaccine mutates into a form that may cause paralysis. This can only occur where vaccination coverage is very low. To protect children from this very rare risk, OPV will be removed in a phased manner over the next few years. The first step is to replace tOPV with bivalent OPV (bOPV), which doesn’t contain the type 2 component, thereby removing the risk of type 2 VDPVs.

1. Giving IPV alongside OPV has been shown to be the most effective way of rapidly building immunity against all types of poliovirus. The introduction of IPV prepares children’s bodies for a rapid build-up of immunity in case an outbreak after the switch would need fast campaigns to protect children against the virus.

3. IPV will boost immunity against poliovirus types 1 and 3 in children who had previously received OPV, bringing us closer to a world in which every child is fully protected and stopping the virus for good.

Strengthening routine immunization systems is a core pillar of the strategy of the Global Polio Eradication Initiative. As IPV is an injectable vaccine it needs to be delivered by a trained health worker, unlike OPV, making the urgency of strengthening routine immunization has become even more apparent. In many countries, such as Bangladesh, the introduction of a new vaccine such as IPV provides an opportunity to strengthen the entire system through the expansion of cold chains, training health workers, and renewed community outreach. By using the lessons learned through the eradication of polio to strengthen routine immunization, the GPEI is ensuring that the legacy of polio eradication stretches into the future in more ways than providing a polio-free world.

The Bill & Melinda Gates Foundation, Norway, and the United Kingdom are generously supporting the introduction of IPV in routine immunisation schedules in 72 Gavi-supported countries. In addition, Canada is providing critical catalytic one-year support to help 19 lower middle income countries, enabling them to introduce IPV.
By increasing immunity against all strains of poliovirus, filling the immunity gap against type 2 and helping to enable the removal of type 2 OPV, this global vaccine introduction is helping to secure a lasting, polio-free world for everyone.

Read more about the global introduction of inactivated polio vaccine and the switch here or see find more information on the WHO website.

Status of IPV use in routine immunization systems in January 2013: 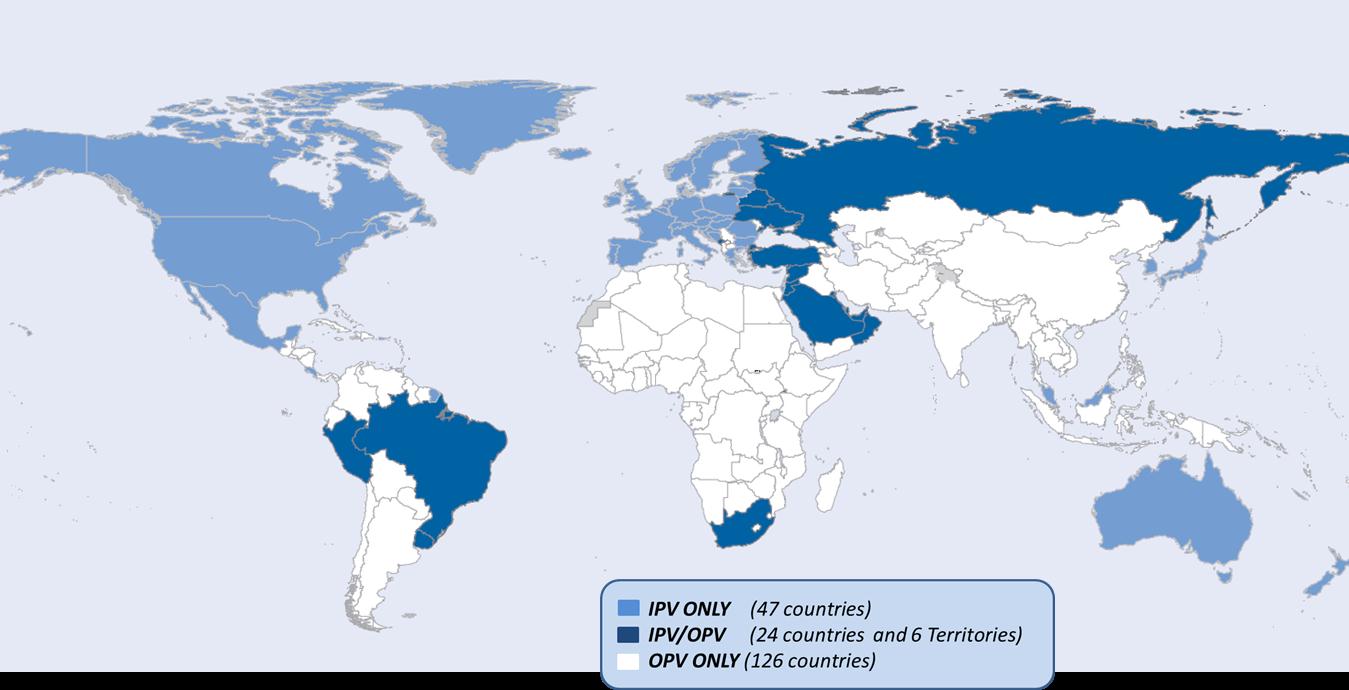 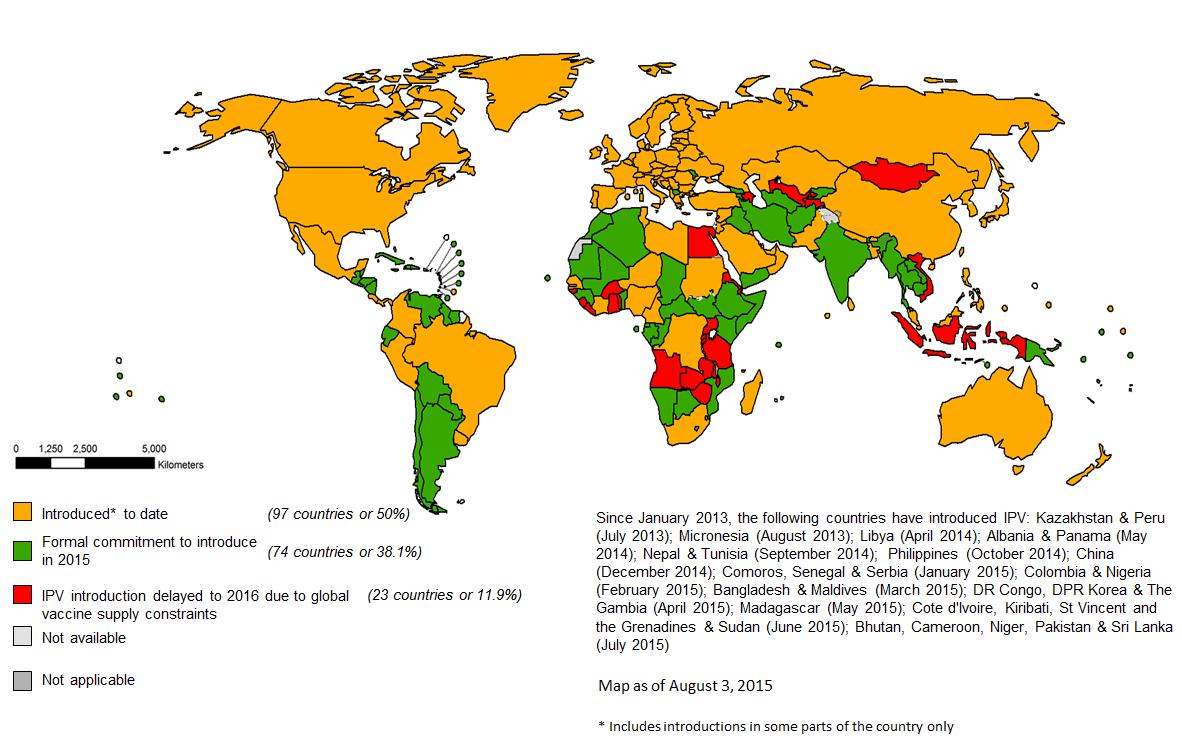