As a result of ongoing disease surveillance, the Global Polio Laboratory Network (GPLN) has confirmed that a child in Changara district, Tête province, Mozambique, was paralyzed by type 1 wild poliovirus (WPV1).

The child experienced onset of paralysis on 25 March 2022, and sequencing of the virus confirms that it is linked to the imported WPV1 case confirmed in Malawi in February.

While this detection of another WPV1 in the southeast Africa region is a concern, it is not unexpected following the Malawi detection in February and further underscores the importance for all countries to prioritize immunization of children against polio.

Mozambique has participated in the multi-country coordinated vaccination campaigns in response to Malawi’s imported WPV1, with two vaccination rounds already conducted. The most recent took place at end of April, with 4.2 million children vaccinated across the country, and the Global Polio Eradication Initiative (GPEI) is supporting countries to strengthen disease surveillance and prepare for the remaining two campaign rounds. These will cover Malawi, Tanzania, Mozambique and Zambia, with Zimbabwe joining the later rounds to ultimately help reach over 23 million children under five years with polio vaccine by end of August 2022.

Mozambique last recorded a case of wild polio in 1992 though the country has more recently been affected by an outbreak of circulating vaccine-derived poliovirus type 2 (cVDPV2). Three cases have been detected since April 2021 and vaccination campaigns in response to the outbreak are continuing, which include use of the novel oral polio vaccine type 2 (nOPV2).

Wild polio remains endemic in just two countries – Pakistan and Afghanistan. The WPV1 detection in Mozambique does not affect the WHO African Region’s wild poliovirus-free certification status officially marked in August 2020, as the virus strain originated in Pakistan. However, any child paralysed by polio is one too many. The polio eradication programme has seen importations from endemic countries to regions that have been certified wild poliovirus-free in the past and has moved quickly to successfully stop transmission of the virus in these areas.

Polio anywhere is a threat to children everywhere. It is vital that all parties ensure that the GPEI has the support it needs to implement its five-year eradication Strategy in full and ensure no child is paralysed by polio ever again. 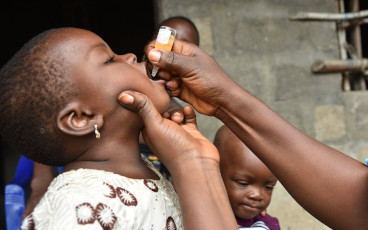 For many Palestinian parents, vaccination comes first
The first supplementary polio campaign in eight years puts caregivers to the test