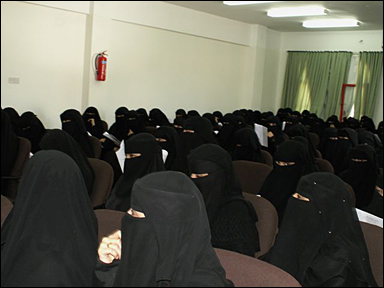 Vaccinators – often volunteers – are recruited and trained in the days before a vaccination campaign. These women are the critical entry point into a household, as men are not usually allowed inside. 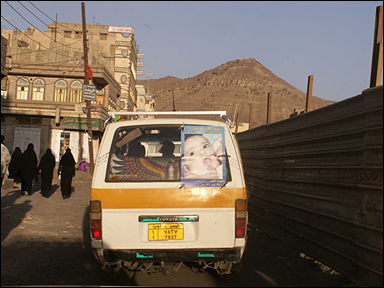 Posters on cars, buses and walls remind people of the importance of vaccinating their children. Radio and television announcements invite parents to immunize children. 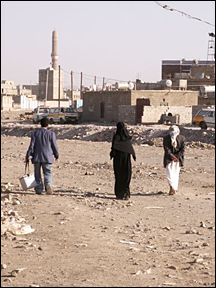 A vaccination team sets out in Sana'a city, the capital of Yemen. Across the country, such teams will drop vaccine into the mouths of 3.8 million children. The vaccine is monovalent, protecting the child against the type 1 poliovirus, which circulates in the area. 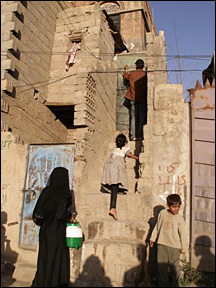 Equipped with maps that show all the houses in a neighbourhood, vaccinators knock on every door to find children. One team member climbs the stairs to the upper floor of one of the city’s traditional houses, while another waits below with the cooler containing the vaccine. Every morning, these teams pick up vaccine from a central location and load it into their coolers. A special monitor on the vial changes colour if the vaccine has been out too long and is no longer useable. 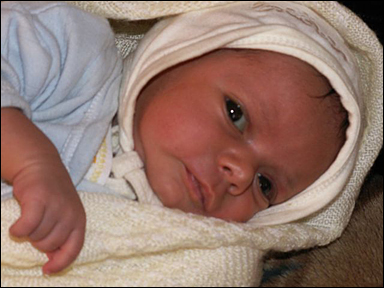 Newborn Sifa is given her first dose of the vaccine. As polio vaccine has to be given repeatedly before the body develops immunity, she already has a good chance of escaping polio. 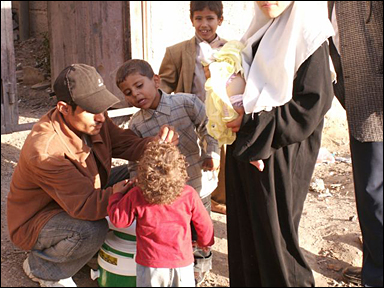 Children run enthusiastically out of their houses to take the vaccine. Their fingers are marked with indelible ink to show that they have received their dose and they proudly show off their finger marks to passers-by. 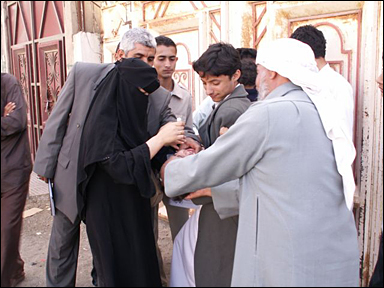 A community leader helps the vaccinator and father to give the vaccine to a child. These leaders are highly respected in their communities – elders, teachers, doctors, preachers, spiritual figures, business people. They encourage parents to have their children immunized. 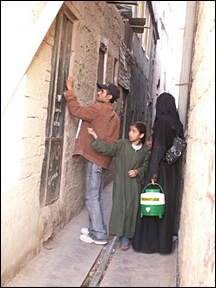 The outside of a house is marked with chalk to show that vaccinators have visited. The marks tell vaccinators whether children in that home were vaccinated or not. If not, a second visit is arranged. 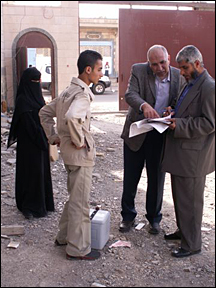 A monitor looks through the vaccination team's maps and tally sheets, which record the details of every visit. Monitors fan out over the same areas as the vaccination teams, double-checking their work and making sure each household has been visited successfully.

As long as poliovirus continues to circulate anywhere, it threatens children everywhere. Yemen has taken this message on board, ensuring the country’s children are protected against polio by holding a nationwide vaccination round this month. Funding for the campaign included a grant from the Kingdom of Saudi Arabia.
Yemen, which has been polio-free since 2009, is considered to be at high risk of reinfection with poliovirus, as recent instability has led to decreasing access to social and healthcare services, including vaccination for children. Yemen is also threatened by the possible international spread of poliovirus from the Horn of Africa region and continued intense transmission in Chad and northern Nigeria. The country suffered from a severe outbreak of polio in 2005, following the importation of poliovirus of northern Nigerian origin, paralysing 478 Yemeni children.

Heeding the lessons of the past, the country launched National Immunization Days (NIDs) on 14 November at a ceremony hosted by Vice President Abd-Rabbu Mansour Hadi. More than 40,000 health workers were mobilized, aiming to vaccinate more than four million children under five years of age over four days. Prior to the vaccination round, public service message were broadcast on television and radio, posters and banners were widely distributed, and around 3,330 Imams were brought on board to inform Yemeni parents of the importance of vaccinating their children.

While a full analysis of the round is still being compiled, initial reports tell of “unprecedented cooperation and support from communities and local authorities in most part of the country”. By the third day of the campaign, more than 3.7 million children had already been immunized.

In addition to conducting National Immunization Days, countries at risk of polio re-infection, like Yemen, should continue to ensure that their acute flaccid paralysis (AFP) surveillance system is well functioning and able to detect poliovirus importations, and routine immunization coverage is increased.

Yemen is planning to conduct another round of National Immunization Days in early December.